“Aircraft makers and pilot unions are calling for a ban on the transport of lithium battery shipments aboard passenger planes following fears of fires that could prove difficult for aircraft fire protection systems to contain. An industry paper obtained by The Associated Press (AP) cited recent tests conducted by the Federal Aviation Administration (FAA) that showed overheating of the batteries could result in explosions.”

“The FAA tests revealed that batteries emit explosive gases when overheated, and that aircraft fire protection systems ‘are unable to suppress or extinguish a fire involving significant quantities of lithium batteries, resulting in reduced time available for safe flight and landing of an aircraft to a diversion airport,’ according to AP. ‘Therefore, continuing to allow the carriage of lithium batteries within today’s transport category aircraft cargo compartments is an unacceptable risk to the air transport industry.'”

Note that charging of the lithium batteries is not required to initiate a fire; a fire can start with the batteries sitting unconnected in their shipping containers. Triggers can include a manufacturing fault (short) in a single battery cell, a short caused by mechanical puncture during rough handling or travel, shorted terminals due to improper packaging, external overheating, or battery gas emissions that can be ignited by electrostatic discharge.

Update 3-21-15: I guess the word is spreading about lithium batteries and aircraft safety. A reader sent in this pix of a warning label that was on his recently purchased lithium batteries: 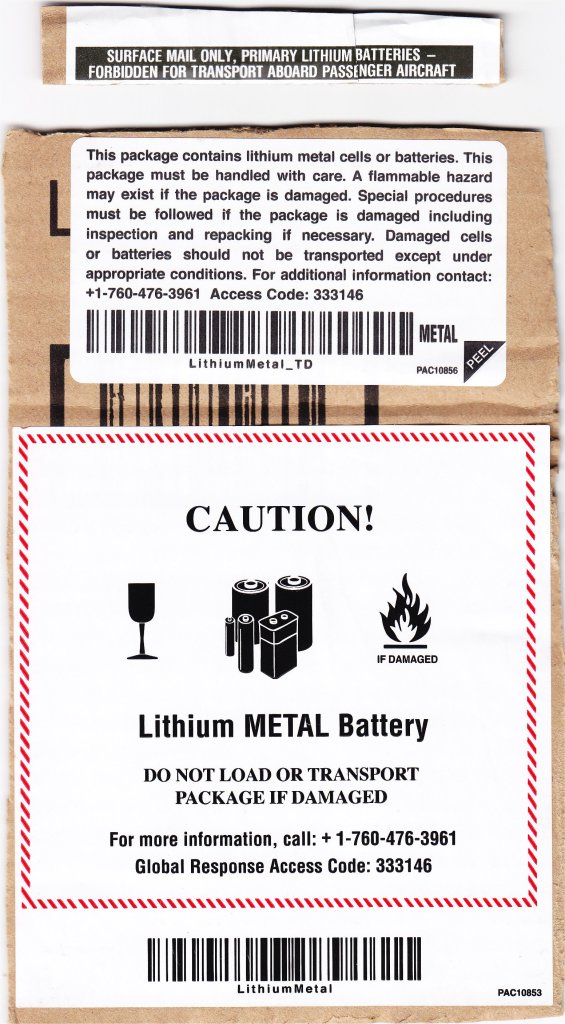 According to Malaysian officials, the plane was carrying 440 pounds of lithium batteries. Lithium batteries, sitting inert (not being charged or discharged), were identified as the cause of the fire and resultant 2010 crash of a UPS 747 flight at Dubai. Ironically, even though “improper storage” in that case was determined to be the cause of the fire, I have never read any explanation of how improper storage can ignite a lithium battery. It appears more likely that lithium batteries, under certain conditions not completely understood (e.g. a combination of battery construction and chemistry, heat, vibration, and/or shock) can spontaneously ignite, albeit very rarely.

In addition to pilot Goodfellow’s comments, an added interesting point is that Flight 370 also gained very high altitude shortly after communications ceased. It could be that the pilots, upon becoming aware of the fire at that time, tried to quickly elevate the plane to quell the fire by starving it of oxygen. This might have been an excellent maneuver for most fires, but lithium batteries, once ignited, create their own oxygen and will continue to burn at high altitude.

Bottom Line: Until the cause of the disappearance of Flight 370 is positively determined, the possibility of a lithium battery fire is a reasonable hypothesis, and worth investigating.

Innovative thinking includes taking old established technologies and applying them to modern applications. Peugot has recently proved this point by using compressed air instead of the battery (and/or supercapacitor) typically used in hybrid vehicles for stop-start energy savings.

For details please see “The car that runs on AIR: Peugot reveals plans for hybrid set to hit the streets next year“

News Bite: Boeing Continues to Gamble with Lithium Batteries in the Dreamliner

As mentioned previously (e.g., “Boeing’s Fix for its Flaming Lithium Batteries: Is There A Fatal Flaw?“), until Boeing digs down to the root cause of their lithium battery problems, they — and those who fly on the Dreamliner —  will continue to be exposed to undefined risk.

(Note: Boeing provided a report, “Certification of 787 Battery Solution,” back in April, which lists “improvements” and “enhancements,” but makes no mention of a root cause.)

A Tesla Model S electric vehicle, which uses lithium batteries, burst into flames after supposedly running over a road obstruction. The state trooper who investigated the event did not find evidence of an obstruction.

The car’s battery pack is located in the floor, so it is possible that an obstruction ruptured the pack. But without confirmation, it is also possible that the battery pack erupted in flames due to an internal defect, similar to the Boeing incidents. Low-probability incidents by their very nature will occur rarely, but when they do occur they can be deadly when associated with high energy storage system, such as battery packs.

Photo above from the USA Today report: http://www.usatoday.com/story/money/cars/2013/10/02/tesla-fire-stock-falls-analyst-downgrade/2911345/

“A flight from Warsaw to Chicago that was scheduled to fly on Wednesday was canceled because the aircraft had “problems with the power supply…” “The spokeswoman would not say if the latest technical problems were related to over-heating batteries which forced the grounding of all Dreamliners for over three months.”

It sounds like something from The Onion: “Boeing on Monday admitted it may never be established why batteries failed on two of its high-tech Dreamliner aircraft, as work began to fix the safety problem that grounded the company’s wide-body passenger jet.”
-from “Boeing in the dark over 787 battery fires,” by Andrew Parker, 22 April 2013 Financial Times

“Boeing’s fix includes more insulation between each of the eight cells in the batteries. The batteries will also be encased in a new steel box designed to contain any fire and vent possible smoke or hazardous gases out of the planes.

“…both the F.A.A. administrator, Michael P. Huerta, and Transportation Secretary Ray LaHood said they were are satisfied that the proposed changes would eliminate concerns that the plane’s two lithium-ion batteries could erupt in smoke or fire.”
-“F.A.A. Endorses Boeing Remedy for 787 Battery” by C. Drew and J. Mouawad, 19 April 2013 New York Times

Conspicuously absent from this pronouncement is a definitive identification of the root cause of the lithium battery fires. Therefore Boeing, the FAA, and the Department of Transportation are all guessing that the stated modifications will fix the problem. I hope they are correct. But if they are it will be a matter of luck, not engineering diligence. The dissembling of the FAA and Department of Transportation are clearly evident in their own words: they say that they are “…satisfied that the proposed changes would eliminate concerns that the plane’s two lithium-ion batteries could erupt in smoke or fire.” If they are so satisfied, then why is it necessary to have a steel box to contain a fire? If they are so satisfied, then why did they not provide the supporting evidence to support their conclusions?

Also, Boeing and these government agencies have touted a few test flights as being of particular significance in proving the safety of the batteries. This is nonsense. The battery fires are low probability events, occurring only once for thousands of hours of operation. This implies that there are subtle variables in the battery construction, chemistry, and/or operation, which when combined worst case will cause the batteries to overheat. This combination may only occur for a small number of manufactured batteries, and fires may occur only when those particular batteries are exposed to a worst case combination of stresses (temperature, charge currents, etc.).

Therefore a handful of test flights, of a few dozen hours or so total, are not nearly sufficient to empirically identify a low-probability event. The identification of such an event would require hundred or even thousands of test flights, which is obviously not practical. Therefore the only alternative is an investigation that drills down and positively identifies the true underlying failure mechanism (as recommended here: “Flying the Flaming Skies: Should You Trust the Boeing Dreamliner?“). It is my opinion that this has not been done, because if it had, this knowledge would be trumpeted by Boeing.

I’m not flying the Boeing Dreamliner until I see the evidence that supports the optimistic conclusions of Boeing, the FAA, and the Department of Transportation.

Despite claims that lithium battery technology is improving, lithium batteries continue to catch on fire. See the article above for some recent Mitsubishi examples.

The continued widespread use of a product that poses a serious and thus far unresolvable safety hazard is apparently based on the unfortunate business practice of balancing the costs of jury awards against the competitive advantage of using a dangerous product (lithium batteries have smaller size/weight for energy stored, compared to much safer types). Is there a CEO out there who is willing to forfeit some profits by discontinuing the use of lithium batteries? If so, please speak up.

Just a quick note for those following this fascinating story.

Michael Sinnett, Boeing’s chief project engineer, said in a recent briefing that “Boeing is redesigning its batteries to ensure a fire isn’t possible. Among the new features will be a fire-resistant stainless steel case that will prevent oxygen from reaching the cells so fire can’t erupt.” (from “NTSB Contradicts Boeing Claim of No Fire in 787 Battery,” by Alan Levin , 15 Mar 2013 Bloomberg).

The problem with that statement is that once a lithium battery is heated sufficiently, it releases its own oxygen to fuel continued burning/explosion. That’s why lithium fires are extremely difficult to extinguish, and why an outer case, although it may keep a fire from spreading, will not prevent a fire from erupting.